gains entry to US market 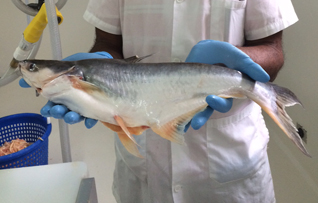 This year has not been a good one for prospective importers of pangasius to the United States, but a new producer in the Dominican Republic has navigated a route through mounting red tape to get approval to bring its product stateside.

On 25 October, Value Aquaculture, based in Cabarete, D.R., received approval from the U.S. Department of Agriculture to import siluriformes, or pangasius, into the U.S. While the approval is valid for all pangasius produced in the Dominican Republic, Value Aquaculture is currently the only producer of the species in that country.

Following the USDA approval, Value Aquaculture is now seeking customers in the United States, according to Sean Bergen, the owner of Sustainable Seafood Sales in Portland, Maine and a partner in Value Sustainable Aquaculture, the joint venture set up to handle the import and distribution of Value Aquaculture’s fish into the U.S.

“It’s a very compelling story,” Bergen told SeafoodSource. “They’ve raising a product that’s all-natural, raised in clean water that comes right out of the mountains, and they’re creating jobs in an area of the Dominican Republic that’s quite poor overall.

Value Aquaculture was formed five years ago by a group of four German nationals, including managing director Franz Fix, who originally moved to the Dominican Republic to follow his passion for windsurfing. After buying and running a resort in the Caribbean nation, Fix teamed up with three fellow Germans to purchase a nearby land-based shrimp farm. Together, they decided to convert it into the Western Hemisphere’s only farm producing pangasius.

After three years of research and development, the company settled on a growing process that uses no antibiotics or growth hormones and has a feed conversion ratio of 1.4 to 1. Value Aquaculture also figured out how to breed its pangasius year-round, ensuring a constant supply of new fish, which Bergen said was a vital step forward, since the company sells its fish fresh rather than frozen. According to Bergen, the company has also managed another remarkable feat – maintaining an eight-month growth cycle from hatchling to harvest.

Value Aquaculture began its grow-out phase in 2014, ramping production to reach 300 metric tons in 2015, with a projection of reaching 1,500 metric tons in 2017 which amounts to about 100,000 fish in the company’s ponds at any given time, and about 10,000 pounds per week in fillet weight. The company uses a local processing facility to fillet its fish and then packages it specifically for fresh export.

However, in 2014, the U.S. government created a major obstacle to Value Aquaculture’s expansion efforts when it passed a law requiring all imported pangasius to be inspected by the USDA, in addition to already-required U.S. Food and Drug Administration (FDA) inspections. Supporters of the law were accused of using to protect the domestic catfish industry from lower-priced imports of a similar-tasting fish.

“The rule change on oversight created quite a roadblock for us, and forced us to spend the last six months working to get the Dominican Republic on the USDA’s list of accepted countries for import. Meanwhile, we’ve been in a holding pattern,” Bergen said.

Further frustration has come from the fact that all of the USDA’s certified inspection facilities for pangasius are set up for frozen product, Bergen said.

“The inspection facilities are not set up for what we do. We’d like to bring in shipments of fresh product and you can’t bring those into a freezer unless you have it inspected. That also affects our timing, because you’re really on the clock when you’re dealing with fresh product,” Begen said. “So we’ve been really frustrated with the way these new rules were written, and we’ve been working with the USDA to modify them and allow us to bring in fresh product in an easier manner.”

Value Aquaculture is working with the National Fisheries Institute to get the onerous law repealed, Bergen said, but with efforts to do so held up in the U.S. House of Representatives, the company has resolved to attempt to make progress under the new rules.

Last weekend, with USDA approval in hand and using a new system set up by the USDA in a fresh warehouse in Miami, Value Aquaculture successfully exported a small shipment of its pangasius to the U.S.

Now that Value Aquaculture can export its fish to the U.S., Bergen has stepped up his marketing efforts to U.S. retailers and wholesalers. He said he previously had promising conversations with representatives from Publix, Wegmens, Sysco, Ipswich Shellfish and Delhaize, but that conversations had stalled due to the importing snafus.

“We got stuck for the six months, but now that we’re able to bring shipments in, we can start marketing again,” Bergen said.

Because Value Aquaculture’s pangasius – which it markets as satchi, another accepted name for the species – is a premium product, it’s more expensive than most other available pangasius, which comes frozen from Vietnam. But the USD 5 (EUR 4.50) price range for its fillets still compares very favorably with tilapia, barramundi and cobia, Bergen said.

“It is a very different price-point, but it’s also a very different product. The pitch is different from anything they’ve heard before,” he said. “I really encourage people to try our fresh product. When you get [our satchi] fresh and filleted, you really don’t have to do much to it. People are really amazed by the flavor and texture – it really is a very pleasant-eating fish, and the flavor is much more than people expect.”

According to statistics recently released by the National Oceanic and Atmospheric Administration, pangasius is the sixth-most popular species of seafood and third-most popular whitefish species in United States, with Americans consuming 0.74 pounds of it per capita. That convinces Bergen that there’s a market for his satchi.

“We’re still at the point where we’re teaching people about the product,” he said. “But we have fish in the water and we have capacity to start producing right away. We’re hoping for a good holiday season and to really break it out by the new year.”